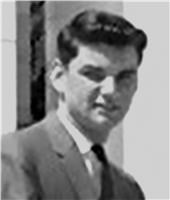 Born in Amsterdam, NY on June 17, 1932, he was the son of the late James and Nancy (Fabozzi) Gatto.
In addition to his wife Marian, Richard is survived by his loving siblings Angela Massey and Robert (Beth) Gatto. Richard also leaves his longtime Colorado friends Dan and Robyn Alsop.

Richard graduated from LaSalle Institute where he met his lifelong friends Bill Diehl and Hyck DerGurahian. At LaSalle, as co-captain, he loved playing varsity basketball. He was known for being a "slick play maker and high scorer" earning him the nick name "Rapid Richard".

Richard served in the Air Force during the Korean War from 1952 to 1956, attaining the rank of Staff Sergeant. He was stationed in Seoul South Korea, and then Cheyenne, Wyoming. While stationed in Cheyenne, he met and married Marian, his wife of 64 years.

Richard also attended Regis College and Arapaho Community College in Denver, Colorado, where Richard and Marian resided for over 60 years.

He worked in Finance for Triax Communication, U.S. West Financial Services and Bank Western. Given many corporate mergers and acquisition, he worked for a number of corporations before his retirement.

Those who know Richard can count on him for a joke or kind words. He was a sensitive soul who liked to make others smile. He appreciated the important things in life like holding his wife's hand or eating mint chip ice cream.

Richard and Marian recently moved back to the Albany area to be close to family.

Interment with full military honors will be in Saratoga National Cemetery, Schuylerville. On Tuesday, December 22, at 1:30 pm.

For directions, information, or to light a memory candle for the family please visit www.dufresneandcavanaugh.com.
To plant trees in memory, please visit our Sympathy Store.
Published by The Denver Gazette on Dec. 21, 2020.
MEMORIAL EVENTS
Dec
22
Interment
1:30p.m.
Saratoga National Cemetery
, Schuylerville, NY
Funeral services provided by:
Dufresne & Cavanaugh Funeral Home Ltd.
MAKE A DONATION
MEMORIES & CONDOLENCES
Sponsored by Dufresne & Cavanaugh Funeral Home Ltd..
4 Entries
Marian and family. It is with heartfelt sadness when I heard the news about Dick. Always a pleasure to be around. I am glad I got to know you over the last few months. You will be truly missed.
Rita
December 26, 2020
Dick and Marian were good friends to my parents and I will always be grateful for their friendship that spread to me through my folks. I will never know two people more special than Dick and Marian. Dick will be missed and I wish Marian the best. You are in my thoughts and prayers.
Dianne Lindt
Friend
December 20, 2020
I've known Dick since I was a kid, he and Marian were friends of my folks ( mom and Marian are cousins). I remember Dick as a good hearted man and loved kids. Gods speed sir!!!
Rick Linn
Friend
December 19, 2020
I’ve known Dick since I was a kid. Marian was a cousin of my moms. Always enjoyed our visits with them in Denver. Dick was good hearted man and a damn handsome one too! Last time I saw them was late 90’s. They were with my folks and they had Jerry with them.
Gods speed sir!!!!
Rick Linn
Friend
December 19, 2020
Showing 1 - 4 of 4 results